There are many use cases of Docker. I see people primarily using it for Continous Integration and deployment. But Docker is also good for development. The obvious advantages of using Docker for development are:

This post will show you how to setup a Ruby on Rails development environment using Docker. My dev machine has

Please note my Docker and docker-compose versions. If yours have lower versions, the example here will NOT work for you. In particular, I'm using docker-compose file Version 2, which are supported by Compose 1.6.0+ and require a Docker Engine of version 1.10.0+. 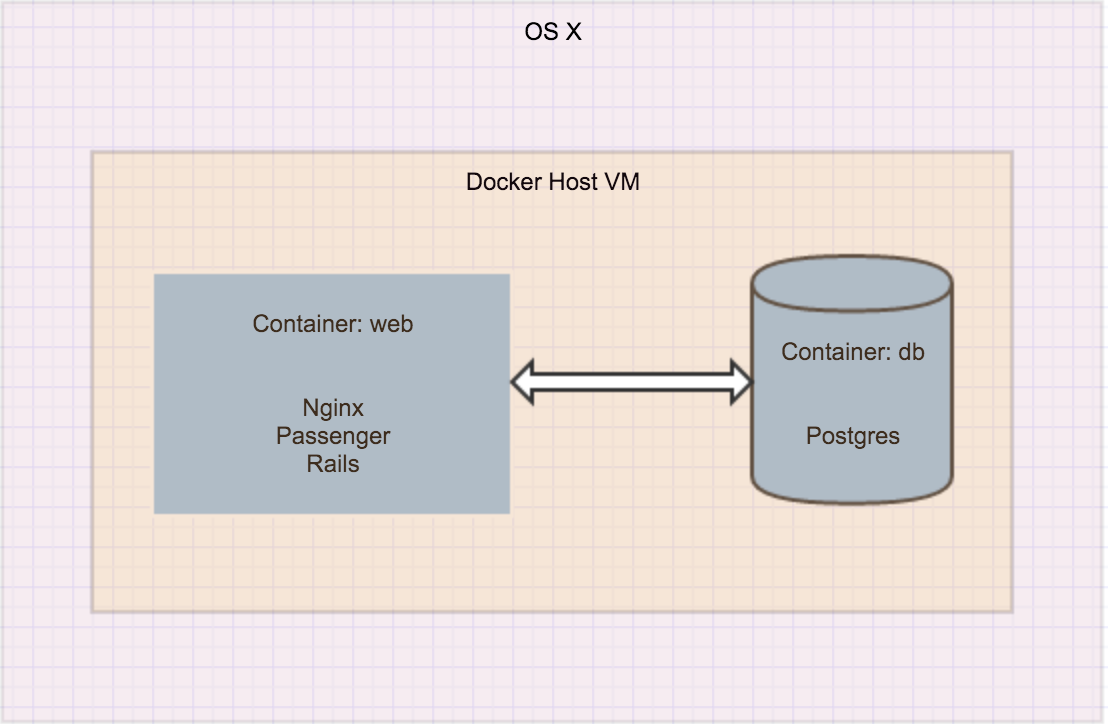 We have two containers, one for app and one for db. The web container has Nginx, Passenger and the Rails app. The db container only has Postgres in it. This architecture is probably common for many Rails apps running in production. And as a good practice, you should make your development environment as close to production as possible so that the potential production issues are exposed in the development stage, not when you receive calls from unhappy customers.

My dev machine only has Docker installed. It doesn't have ruby. How do I create a Rails project? Use Docker.

Create Dockerfile in the project

This is a standard Dockerfile. It's based on phusion/passenger-ruby22:0.9.18, which includes Nginx 1.8.0, Passenger 5.0.22 and Ruby 2.2. It basically has all the dependencies to run the container web. You probably notice that the image doesn't include the Rails app. That's because we want to mount the Rails app as a volume so that when we edit source code of the app we don't have to rebuild the image. This is much needed in development mode to shorten the feedback loop. But in production, you should include the app in the image. We will see how it's mounted in docker-compose.yml

Two lines in the Dockerfile need a bit explanation

First, Passenger recommends running the app as user app because it's a good security practice. So user app needs rw access to the mounted volume.

Second, in order to let app have rw access and not to change the ownership of the files (because we want to edit the source code on local machine and the files are owned by the local user), we change app's uid to be the same as the local user. This is a trick to get around the permission issue of mounted volume on OS X.

Note passenger_user app;, the app is running as app not root.

Note the volumes part. We mount the project directory in the local dev machine as a volume to /home/app/rails_on_docker_for_dev inside the container so that the container has the source code and Rails auto-reloading still works.

We need LOCAL_USER_ID=$(id -u) because docker-compose.yml expects an environment varialbe LOCAL_USER_ID so that it can change user app's uid to the local user's uid.

You should see an error that Passenger complains about bundle install is not run yet. That's correct. The app doesn't have any gem yet.

We want to install gems in ./vendor/bundle because the gems will persist in ./vendor/bundle regardless of the lifecyle of the container. When we update the Gemfile and do bundle install again, it will only install the newly added gems, not everything again.

--user $(id -u):$(id -g) is to make sure that newly created files are owned by the local user. Without it, they will be owned by root.

--rm is to remove the container after it's done.

If you refresh your broswer, you should see a familiar welcome page!

Having only a welcome page is not very exciting. Let's add a Post model.

Now you can CRUD posts. Everything works!

Replace sqlite3 with pg in Gemfile

Update docker-compose.yml so that web and db are linked

Update database.yml to use Postgres

You should see logs from both web and db printed in the console.

Of course, you should setup database first

Everything works as before!

All source code is here.

As you see, it's not that hard to use Docker for Rails development. Essentially, we just need Dockerfile anddocker-compose.yml and link the containers properly. The development workflow with Docker is pretty much the same as without Docker. But the advantages that Docker brings to development are invaluable. It abstracts away the difference between local dev machines and let every developer in your team have a consistent development environment. Isn't that awesome?

What is HTTP/2 and Why HTTP/1.1 has been serving most part of the Web since 1997. As websites get more and more sophisticated and resource intensive, it starts to show its limitations, e.g. one outstanding request per TCP connection. So

Update [2017 Aug 5]: Certbot has been developed by EFF and others as an easy-to-use automatic client that fetches and deploys SSL/TLS certificates. I would recommend using it. Why